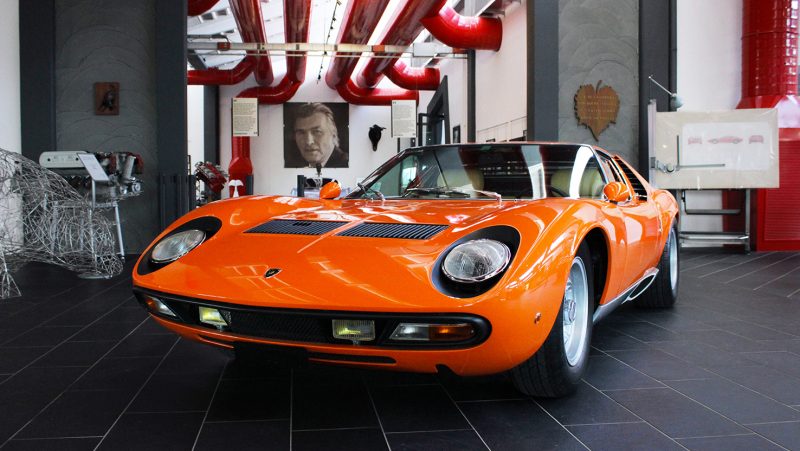 The Ferruccio Lamborghini Museum in Funo di Argelato will take part in the Motor Valley Fest, the new unmissable event, scheduled from May 16 to 19 2019, which involves the territory of the Italian Motor Valley, the renowned “Terra di Motori” (Engines Land) of the Emilia – Romagna region, the selected venues of the Fest is the city of Modena and its most beautiful places.

During the event, the Ferruccio Lamborghini Museum, a founding member of the Motor Valley Association, will be present with a dedicated stand in the cloister of the Military Academy of Modena, exhibiting a model of the famous Miura P400SV.

The Miura P400SV, an acronym of SuperVeloce, is the third version of the Lamborghini Miura, produced following the previous versions P400 and P400S. Production started in March 1971 and ended in 1973; only 150 copies were produced. The P400SV version of the Miura is considered as the definitive one. The project was the fruit of the collaboration between Gian Paolo Dallara, Giotto Bizzarrini and Paolo Stanzani and the design was by Marcello Gandini for Bertone.

The SV always sets the central engine of the previous versions but the power has been increased from 385 horses (287 kW) to 7850 rpm/min, 15 more than the P400S version. At the Miura P400SV, in addition to mechanical modifications, were made some aesthetic changes. For example, the rear part of the bodywork was enlarged to allow the installation of wider tires as well as to have more traction. Furthermore, the headlights lost their famous lashes. On the day of its debut, the Miura was the fastest car in the world, with a top speed of 280 km / h and an acceleration from 0 to 100 in 6.7 seconds.

The Miura model that the Ferruccio Lamborghini Museum will expose at the Motorvalley Fest is an orange-colored 1971 Lamborghini P400SV early production, one of the historic colors of the Lamborghini Factory. Besides, Miura is a part of the European collection managed by Kidston SA and it has been for several years at the Red – White museum in Germany.

At the Motor Valley Fest booth, visitors will have the chance to see one of Ferruccio Lamborghini’s most beloved creatures, as well to learn anecdotes about the story of Ferruccio by the guides of the Ferruccio Lamborghini Museum, the cultural space inaugurated in 2014 by the comm. Tonino Lamborghini. (entrepreneur in the sector of accessories and luxury retail projects), son of the mechanical genius who gave life to the famous Bull brand.