By PRESSOFFICE on 15 February 2017in News 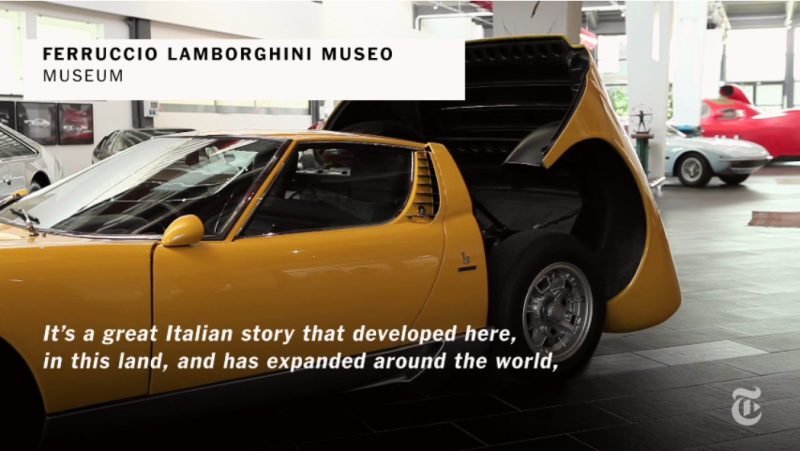 The New York Times, the most influential newspaper in the world, has mentioned the Ferruccio Lamborghini Museum in a special ’36 Hours in Bologna’, published in the travel section of the website and on Sunday, October 4th as well as in the hard copy of the International New York Times. [link1, link2]

The reportage was developed thanks to a surprise visit from a reporter of the New York Times who wanted to discover the peculiarities of the Emilian county town, Bologna. In September, after choosing 11 ‘favorite’ stages, the NYT Tv crew came back to Bologna to make a new video with special interviews named Bologna in 36 hours.

The fourth stage is dedicated to the excellence of the Motor Valley, where it is also mentioned our Ferruccio Lamborghini Museum:

‘…the excellent Ferruccio Lamborghini Museo, which moved to a new, larger building in the nearby town of Funo di Argelato, just north of Bologna, in 2013. With any luck, your tour guide will be the charming Fabio Lamborghini, nephew of the famous industrialist, who can tell you intimate family stories about the large collection of Lamborghini cars, tractors, speedboats and even a prototype helicopter.’

In the TV reportage, Ferruccio Lamborghini’s grandchildren, Ginevra and Ferruccio, mention Bologna’s city and tell the great Italian story of their grandfather and show all the extraordinary collection of the family.